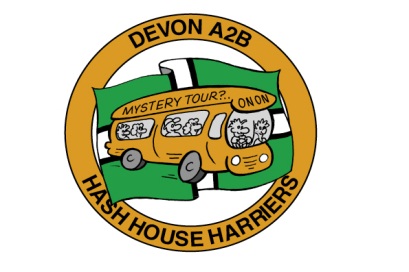 The Words
Run no. 75
The Bridford Inn,
Hares; Manpig, Forrest Stump & Shatnav
Well, don’t faint, I’ve managed to avoid doing the words now for 4 plus years, but I couldn’t duck Manpig’s radar yesterday, and so got collared!  Be warned.  It won’t be pretty!
A small but select bunch of hashers circled up in the Bridford Inn carpark at 12.30pm for Run no. 75 of the A2B.  All hashers were chomping at the bit and ready to go.  But wait, where were the hares?  Oh, of course, it’s Manpig, Forrest  Stump and Shatnav.  It could be a long wait.  To be fair, there had been a deluge the evening before and indeed just before us  ‘last minute lil’s’  turned up, it had once again , bucketed down on the early bird’s.  So they were probably out re-laying the trail.
Sure enough, like the diva’s they are, the three amigos arrived at 1pm.  Manpig stumbling out of the passenger door of the car .  Umm, laying a trail, or dutch courage early sampling of the down down’s??  Forrest  Stump – announcing he had to be somewhere very important, and Shatnav, clutching a map for dear life.
More evidence of this ‘early sampling’ ensured when Manpig launched into the description of the trail.  The trail indeed had to be rechecked and re-laid in parts.  It was 3 and on, originally laid in sawdust and now some re-laid in flour. ManPig  confessed that he had got lost whilst re-laying some of the trail.
Trail Instructions were;
·         If you end up in a bog you’ve gone the wrong way.
·         If you see a white horse in a field with a jacket on, that’s the right field.
·         If you’re waist deep in bracken , that’s the wrong way.
·         The trail was mostly laid in sawdust , but when you see flour, follow that and don’t follow the sawdust, cos I got lost relaying it.
·         The  flour is not actually flour , its Kaolin, but follow that anyway.
As I mentioned, it appeared  a bit of ‘sampling’ had been occurring.
Shortie  asked ‘how long’ , and to all but Captain Peacock’s  and Meavy Maid’s  dismay, ManPig replied , ‘the short’s are 13.8 and the long’s 14 something’ (At this point I was trying to conjure up symptoms of a rare and debilitating, but very short lived illness that would mean I could snooze in the vehicle whilst my fellow hashers went about their business – anyway whilst I was pondering this, I did not have my wits about me, and ManPig’s beady eye rested on me and said’ Peanut ‘s doing the words’.  And  you, dear reader , have paid dearly for my momentary lapse of concentration.)
Paperwork asked if the trail was going to start any time today, whereupon Manpig welcomed Captain Peacock  as an A2B virgin  then shouted ‘On On that way’, and we set off out of the car park and onto trail.
Manpig was sweeping the trail and  the ‘longs’ and Shatnav was sweeping the ‘shorts’.
On down the hill we ran….
This is where it all goes a bit wrong.  With my rubbish sense of direction and complete lack of memory of where we’ve been, the actual details of the hash are a bit sketchy.  So here are  some bits and pieces.
The trail started and On On  we ran  with  Captain Peacock, Paperwork, Fester and Meavy Maid happily checking the checks.
A long short split presented itself and the pack split.  The shorts ran on with Shatnav clutching his map with determination and conviction until after a couple of miles we reached a junction.  Signposted ahead was Bridford and to the left Moretonhampstead or back the way we had come.  Shatnav looking a little puzzled checked his map and gingerly indicated that
he might be ‘a bit lost’ and perhaps we should go left and see if we can find the trail from another direction.   So we set off until we came upon a ‘X’  ‘Oh don’t mind that’ said Shatnav, that only applies if you are on the trail going the right way!
On On we ran , re joining the trail and eventually met up with the ‘Long’s .  On and through Clampitt plantation,  we came upon a bemused Fester who, as FRB, checked out in 3 directions and thinking we had passed him by had carried on running looking for the pack.  He soon thought better of it and whilst he sat and pondered, up we walked , oh I mean , up we ‘ran’ towards him! 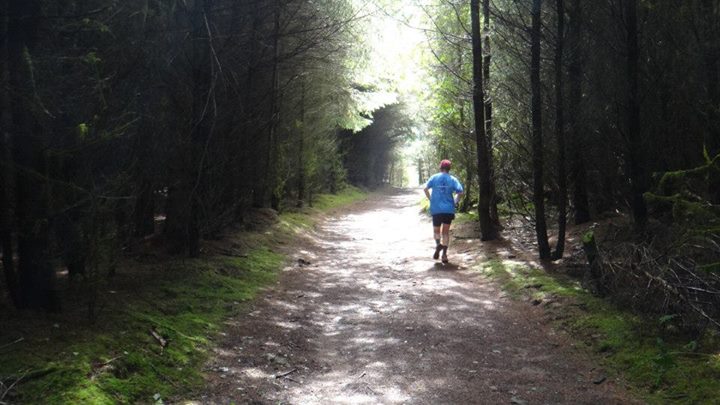 Early on in the trial Hairy Mollusc running through the patches of dappled light in Laployd plantation.


The day threatened rain and we watched as we seemed to run be running towards dark clouds & rain in the distance but the hash gods were kind to us and we had a perfect days sunshine and breeze.   Some showers early on went unnoticed as we ran through the protective canopy of the woods and the plantation. 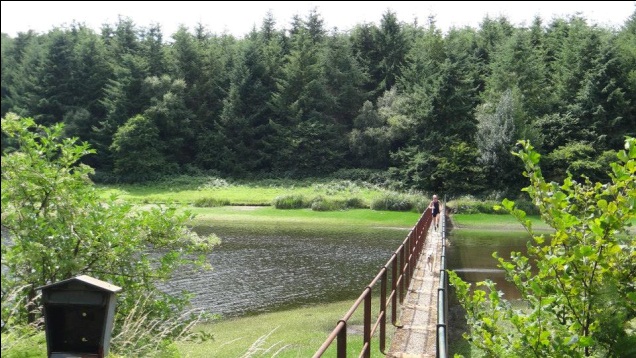 Captain Peacock checking across the Kennick Reservoir dam.
On on we ran and through the plantation out through the bracken until we saw looming up ahead the human head like profile that was ‘Blackingstone Rocks’ 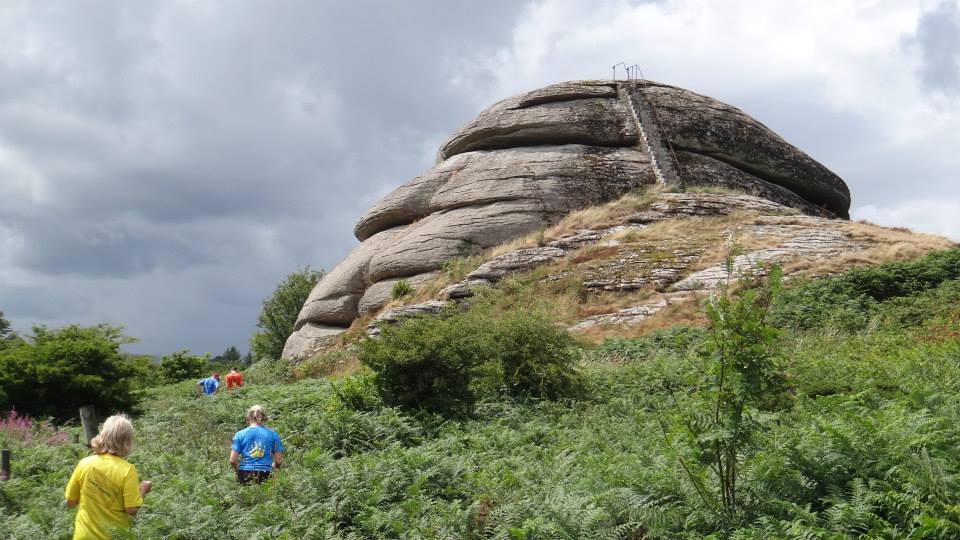 After an ascent up the very handy steps on to the windy top of the rock , we were rewarded with stunning 360 views of Dartmoor and beyond.    Even the hash hounds came for a look.  ‘Moth’ the hash hound virgin showed no fear climbing up and down the steep steps. After Kura had her little ‘top of the world’ adventure, she  descended a little more gracefully and carefully. Perhaps  to make sure that ‘Paraprick’ her minder wouldn’t come a cropper ! 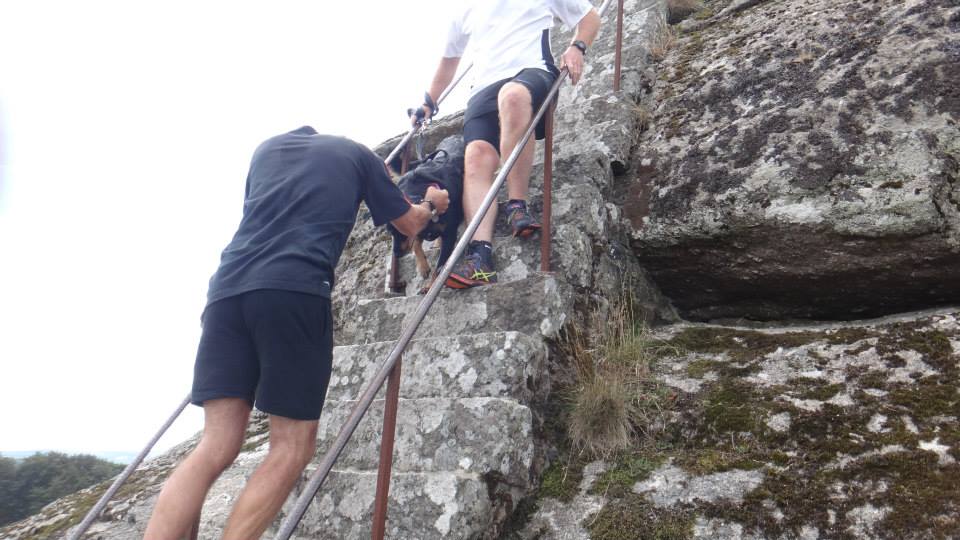 On we ran to our first beer stop in a little pull in signed ‘ only for use for those with limited mobility’.  That was definitely us!
After re-stocking on  the vast array of chocs, jelly babies, peanuts, softies and beer we were ready for the off again.
Not long into the second leg and after crossing a trail, in the distance could be heard a strange garbled cry-  Mof, Mof ,MOF, MOF, MOOFFFF!!!!  On and on the cries went gaining urgency and emphasis.  We finally came to the corner of the field where we spied Paperwork and Captain Peacock tearing around trying to catch hold of ‘Moth’ (Paperwork and Sorepoint’s dogsitting charge for the weekend), who had thought it would be great fun to go and play with those other white ‘dogs’ with the fluffy coats! It was a close one, but the human hashers finally managed to corral the hash hound and all was again well in the world again! 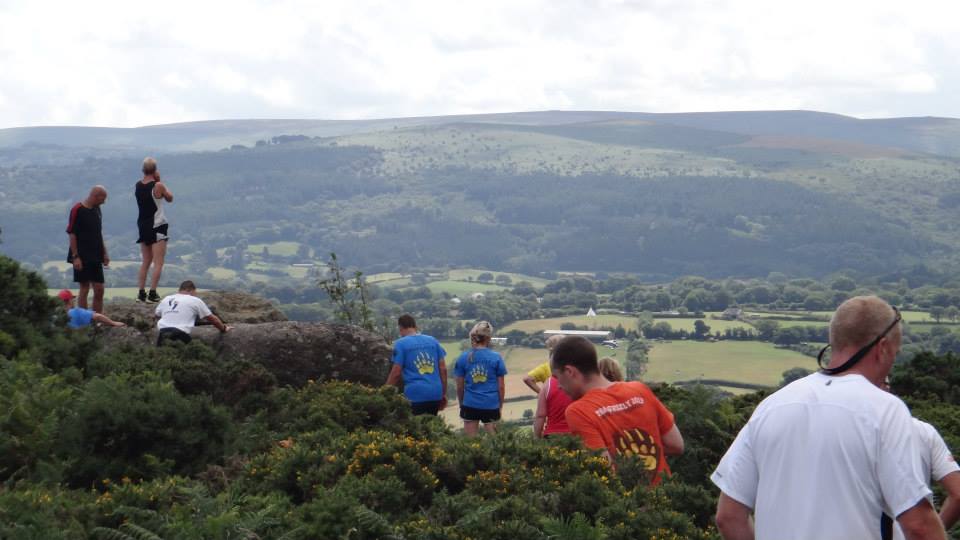 OnOn we ran through fields, lanes and bracken until we came up to Hingston Rocks – Lovely VP of Moretonhampstead and for the really keen eyed, Bovey Castle .
From then the instructions from the hare were; 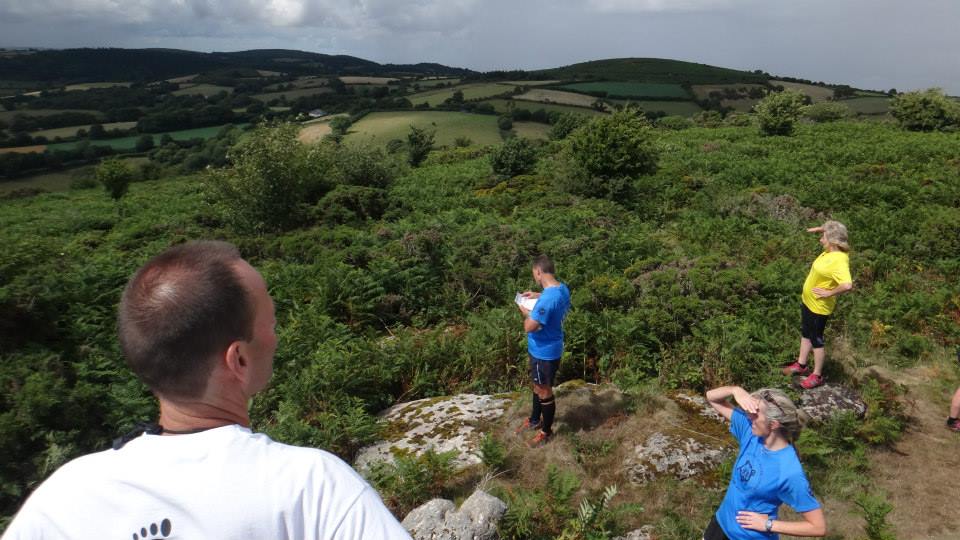 Go on down the hill until you find a dead tree, then you’re on the right track.  (Yes ‘ a dead tree’ – on Dartmoor – there aren’t many of them now are there?) 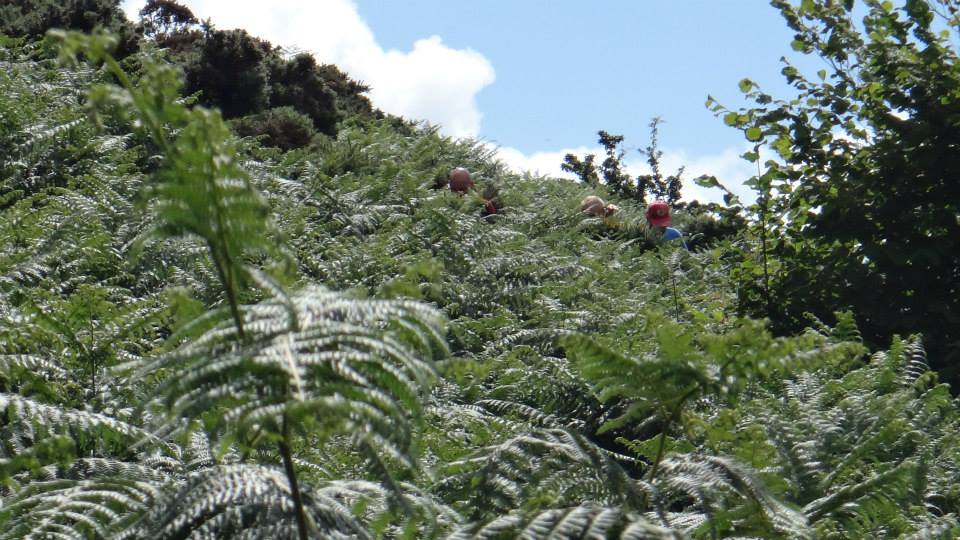 Anyone find that one dead tree yet? Who said that?
Sure enough, as we emerged out of the shoulder height bracken, we came upon the promised  ‘dead tree’ and after a swift head count to ensure none were lost to the bracken, were back on trail down towards the B3212.  Across the road we went and on across Mardon down .
Back through the woods and out where we came on the oasis and it’s keeper , Larks  vomit  in the beer car. 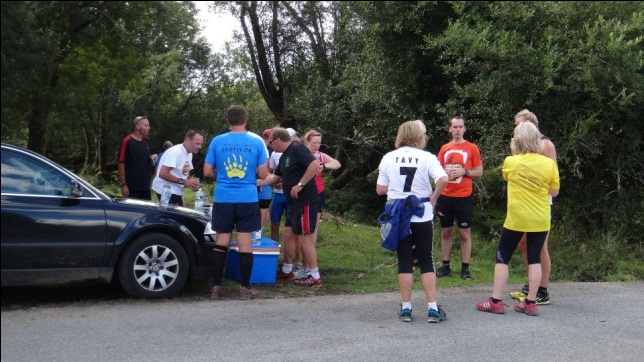 Clifford Bridge – 2nd Beer Stop
Everyone fuelled up again and after agreeing there would be another beer stop before ‘B’ we headed off again through Hitchcome wood, past Wooston Castle fort, and Hore wood.  All mainly down hill and nice and ‘bouncy’.  A bit too ‘bouncy’ for Shortie  who unfortunately took a flying lesson and face planted.  Maybe it was because she was distracted by Sorepoint announcing she loved ‘going down’!  Lucky man Paperwork.
All that excitement was quite enough and with that we all tripped and skipped down and out of the woods with the welcome sight of Fingle Bridge waiting for us.  Oh , and Meavy Maid  perched on the bridge waiting.  I think she had been there quite a while!
We had arrived now at the 3rd beer stop.  The hare announces ; ‘Right well we’re here and the cars are here but the ‘B’ is a couple of miles away and apparently the pub is shut.’  Tumbleweed….  Dum de dum 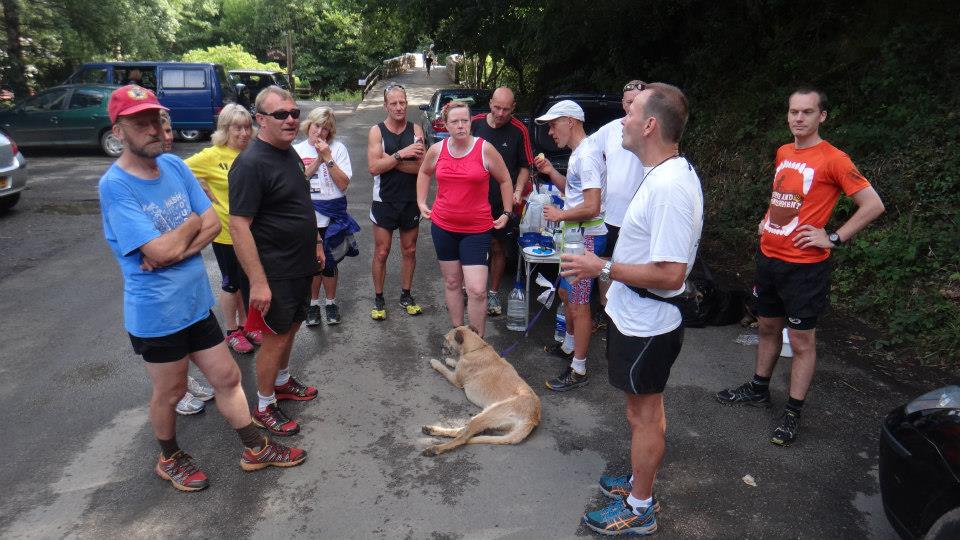